The photo was taken on November 13th, 2009 in San Jose, California. I had been at the Las Vegas concert the night before and had flown to San Jose with a crowd of other Cohenites. By luck I was staying at the same hotel as Leonard and arrived at the same time as him and the band. The photo was taken by Albert Noonan, videographer extraordinaire! 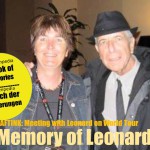