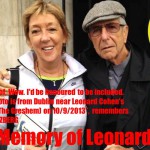 Christof, Wow. I’d be honoured to be included. The photo is from Dublin near Leonard Cohen’s hotel (The Greshem) on 10/9/2013. It was the day before the concert I had tickets for on 11th. I was back to Dublin a second time after being there the previous year for the concert at Kilmainham. Walking back to my hotel, around the corner. I saw LC with a few people on the other side of the street. Since I happened to have a small gift for him and a book of poetry for him to sign ( Book of Longing). in case I happened by some chance to see him, I took a deep breath, crossed the street and spoke to him and gave him the gift. He was very humble and grateful about the present and suggested that one of the team who was outside with him take a photo of me with him. It was an amazing and gratifying experience being able to thank him for all he’d meant to me. He was so kind and generous and I’ll never forget those few minutes as well as the five concerts I attended before he stopped touring. Best wishes, Fay