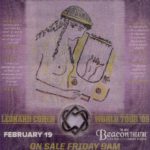 at The Beacon Theatre, New York

A long line of disappointed fans waited outside in the blistering February cold hoping for a last minute spare ticket, but those who didn’t make it in (resale value of a single ticket reportedly reached $700) will have a second chance to see Cohen during his North American tour this spring.

Leonard Cohen played especially for his fans and US media. Later – in April 2009 – his World Tour continued in the USA and Western Canada.

Set 1: Dance M.T.T.E.O.L./ The Future/ Ain’t N.C.F.L./ Bird On The Wire/ Everybody Knows/ In My Secret Life/ Who By Fire/ Chelsea Hotel #2/ Hey, That´s No Way To Say Goodbye/ Sisters Of Mercy/ Anthem/ Set 2: Tower O.S./ Suzanne/ The Gypsy’s Wife/ The Partisan/ Boogie Street/ Hallelujah/ I’m Your Man/ A Thousand K.D. (poem)/ Take This Waltz/ Encore 1: So Long, Marianne/ F.W.T.M./ Encore 2: Famous Blue Raincoat/ If It Be Your Will/ Democracy/ Encore 3: I Tried To Leave You/ Whither Thou Goest (tutti a cappella) 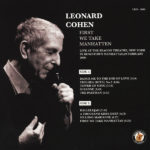