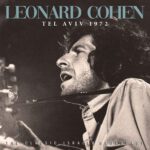 EXTRAORDINARY AND VIOLENT 1972 BROADCAST FROM LEONARD COHEN S SPIRITUAL HOME In 1970 Leonard Cohen toured for the first time in the US, Canada, and Europe, during which he appeared at the Isle of Wight Festival. In 1972, he toured again in Europe and for both his final and penultimate dates in Israel. His performance in Tel Aviv on 19th April, at the Yad Eliahu Sports Palace – essentially an unseated gymnasium – did not go well. Upon the arrival by Leonard and band at the venue, it was explained in no uncertain terms that there would be no seats on the floor. Instead, attendees would sit along the sides and at the far end of the gym in bleachers. And if one person s foot touched the newly lacquered floor, there d be hell to pay. Upon taking the stage, somewhat nervously, the musicians could barely see the fans, much less interact with them. Instead, they could only see The Men in Orange – aggressive security personnel who failed to appreciate the subtleties of Cohen s music. Leonard had had enough. He decided to sing directly to the Orangemen who he began to call The Machine. When that didn t work, he pushed himself forward. Thirty-five minutes in, he invited the audience to come closer, defying the security team. Chaos ensued. They attacked, breaking arms and beating bodies. The band were grateful to get out unharmed, but were traumatised by what the fans had been subjected too. Despite the chaos however, the concert was recorded for radio broadcast, and filmed – from which some of the footage was later uses in Tony Palmer s Bird On A Wire documentary. Previously unreleased on disc, this fascinating recording, which contains much of the disruption included, is now available for the first time on this new CD release. 1. Famous Blue Raincoat 4:26 2. Hey, That s No Way To Say Goodbye 4:43 3. Song To The Machines/I Love Spending The Night With Two Girls 4:10 4. Sisters Of Mercy 3:59 5. Chelsea Hotel (#1) 7:27 6. Avalanche 4:47 7. Suzanne 6:43 8. We Shall Not Be Moved 6:40 9. Leonard Cohen 1972 Interview Part One 8:46 10. Leonard Cohen 19672 Interview Part Two 8:56