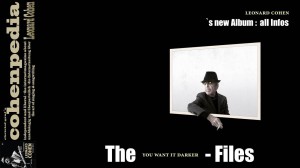 (September 21, 2016) Sony Music Entertainment Canada and Columbia Records celebrate Leonard Cohen’s 82nd birthday with the announcement that his 14th studio album, YOU WANT IT DARKER, arrives in stores on October 21st, 2016.  The new collection of startling songs was produced by his son Adam Cohen, and is available for pre-order now.

The first single and title track, which delves into an unflinching exploration of the religious mind, arrives at radio today. Cohen created this hypnotic groove with the addition of Montreal’s Cantor Gideon Zelermyer and the Shaar Hashomayim Synagogue Choir, whose voices invoke a sound from Cohen’s youth.

YOU WANT IT DARKER

Hypnotic groove. The surprise of a great synagogue choir.  An unflinching exploration of the religious mind.

“Didn’t know I had permission to murder and to maim.”

One of Cohen’s signature melodies. A confession of the selfishness of love and the hope of a correction.

“Only one of us was real—and that was me.”

An old man’s take on desire.

“I was fighting with temptation, but I didn’t want to win”

A slow, relentless, and somehow joyous ballad of letting it all go by. A guitar solo you will remember.

A classic Cohen love song: the deep gratitude felt by one heart opening to another.

„That’s how broken it would be,

what the world would seem to me,

if I didn’t have your love to make it real.”

A seeker hits the road and finds the joys of solitude.

My once so bright

The feeling of a prayer that’s been there forever, but the spiritual comforts of the past no longer available.

“Lift this glass of blood, try to say the grace.”

A song of courage as the heart moves into the darkness.

“Steer your heart past the pain that is far more real than you.”

A brilliant reimagining of “Treaty” as a string quartet; a truly glorious moment ending with a few words from Leonard himself.

“I wish there was a treaty we could sign.”

ALL INFOS ZU YOU WANT IT DARKER here: http://cohenpedia.de/2016-youwantitdarkerfiles-by-christof-graf/