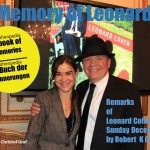 What can I say about my dear friend and client Leonard Cohen? Anything seems inadequate other than thanking him for the extraordinary opportunity to serve. I began working for Leonard in 2004, on a dark legal and financial rescue mission. But for the unqualified brilliance of my then associate and now law partner, Michelle Rice, we might well have failed.

But we succeeded, and our role evolved to that of personal manager, while continuing legal and financial duties. My relationship depended in large measure on our shared spiritual affinity, but we almost never discussed it, lest we frighten the muses. My job was to focus on the practical.

Through work for Leonard, I have come to know all of you in some way, and most of you personally. Some of you have known him through personal and/or professional relationships for decades; others of you met him through the recent, grand renaissance of his performing and recording career.

Leonard would want me to do two things today — to express his gratitude for all you have given him and to ask each of you to forgive his limitations. He passed away abruptly, and had he known he was almost out of time, he surely would have extended the show to thank you himself,

as he did every night on tour, despite my protestations about union overtime after 11:30PM!

Leonard needed to be alone to create his art. He also needed people as evidenced by his overwhelming generosity and graciousness. One of my most important roles was assisting him in finding a precarious balance between these two conflicting needs. The most significant result was a tour in which he luxuriated in solitude, even while traveling with the “family” of band and crew, even during the 387 performances to sold-out audiences in arenas worldwide.

He was surprised but nourished by such solitude on tour. And so, he directed me to start declining requests to meet off tour as well, even requests from close friends, colleagues and family. But for this solitude, we might not have his last three magnificent studio albums.

But Leonard also often shared with me his deep regret that his time alone meant that he could not see those whom he loved or colleagues who were so important to his work. So, he also tasked me with asking others to “please forgive his limitations.” That task became particularly acute during the last four months of his life when he was trying to finish a book, a solitary endeavor.

So that is the context in which I shall try to fulfill what I feel Leonard would want me to say.

For those of you whom he knew intimately, he would want you to be secure in the knowledge of his profound and lasting love, even though in some cases it “might have all gone wrong,” even though “love is not a victory march”, even though it is often only a “broken Hallelujah.”

For those whom he knew mostly through a professional relationship, he would want you to be secure in the knowledge of his deep appreciation of all your efforts to assist in his Renaissance over the past eight years. You helped the world to recognize where he resides in the tower of song — an unrivaled worldwide star — and you have helped assure that generations to come will “continue to hear from him… long after he has gone.”

Used by permission of Robert Kory. Thank you Robert, for that, too.