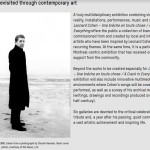 Presented by CBC/Radio-Canada, Leonard Cohen : Une brèche en toute chose/A Crack in Everything is part of the official program for Montréal’s 375th anniversary celebrations. The exhibition is inspired by the world of Leonard Cohen and the great themes of his life and work. This major exhibition is the first to be entirely devoted to the imagination and legacy of this great singer/songwriter, man of letters and global icon from Montréal.

A truly multidisciplinary exhibition combining visual art, virtual reality, installations, performances, music and writing, Leonard Cohen – Une brèche en toute chose / A Crack in Everything offers the public a collection of brand-new work commissioned from and created by local and international artists who have been inspired by Leonard Cohen’s style and recurring themes. At the same time, it is a particularly Montreal-centric exhibition that has received outstanding support from the community.

Beyond the works to be created especially for Leonard Cohen – Une brèche en toute chose / A Crack in Everything, the exhibition will also include innovative multimedia environments where Cohen’s songs will be covered and performed, as well as a survey of his archival material (writings, drawings and recordings produced over the past half-century).

Six galleries are devoted to the critical celebration, loving tribute and, a year after his passing, quiet commemoration of a vast artistic achievement and inspiring life.

A world-renowned Montréal novelist, poet and singer/songwriter who inspired generations of writers, musicians and artists, Cohen is an extraordinary poet of sorrow and the human condition, giving voice to what it means to be fully alert to the complexities and desires of both body and soul.

Leonard Cohen’s thinking, writing and music are a thing of beauty and despair. For decades, the novelist, poet and singer/songwriter tenaciously supplied the world with melancholy but urgent observations on the state of the human heart. With equal parts gravitas and grace, he teased out a startlingly inventive and singular language, depicting both an exalted spirituality and an earthly sexuality. He set the blunt but brilliant instrument of his famous voicea “velour foghorn” so deep and cavernous or, more recently, his raspy chant-like whispersto beautiful melodies and simple arrangements that belied a great musical intelligence. His interweaving of the sacred and the profane, of mystery and accessibility, was such a compelling combination it became seared into memory.

When we came up with the idea for this exhibition, we went to seek the agreement of Leonard Cohen, who was thrilled with the project and the angle we were proposing. Given his recent death, our exhibition has taken on a new meaning. It has also become a tribute to this global star.