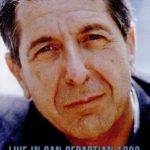 Leonard Cohen only toured three times during the 1980s; in the decade s opening year he performed a couple of shows each in Australia and the US, plus a handful of dates in Europe. In 1985 he followed a near identical itinerary, while 1998 was witness to a more extended European jaunt, plus a few dates in North America. The show featured on this DVD comes from a TV broadcast of Cohen s gig in San Sebastian, Spain, on 20th May 1988, one of five performances he gave in the country in as many days. Touring in support of his I m Your Man album, this delightful appearance in the Basque region, released here on DVD for the first time, features a superb array of Cohen classics and a fine selection of tunes from his then current record.