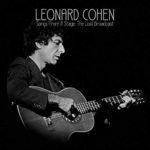 Songs From A Stage: The Lost Broadcast

Canadian singer-songwriter Leonard Cohen was born in 1934. An early writer and guitarist, Cohen began to compose and release folk-rock and pop songs by the mid-1960s. One of his most famous compositions is „Hallelujah,“ a song released on 1984’s Various Positions. Cohen was inducted into the Rock and Roll Hall of Fame in 2008, and he received a Grammy Award for lifetime achievement in 2010. Cohen died in 2016 at the age of 82. In 1968, Cohen recorded a live concert for radio broadcast that comprises this album. These well-preserved sessions from 1968 offer a fly-on-the-wall experience to witness a young Cohen singing practically the entire first album. The voice is fresh and deep, pushing the songs outside the Tin Pan Alley perimeter, and delving into poetry with a richness of words and subject. Today, they still have that raw appeal of a young artist at the peak of his powers. You Know Who I Am / Bird On The Wire / The Stranger Song / So Long Marianne / Master Song / There s No Reason Why You Should Remember Me / Sisters Of Mercy / Teachers / Dress Rehearsal Rag / Suzanne / Hey, That s No Way To Say Goodbye / Story Of Isaac / One Of Us Cannot Be Wrong / Bird On The Wire / You Know Who I Am / Hey, That s No Way To Say Goodbye (Duet with Julie Felix) / So Long Marianne