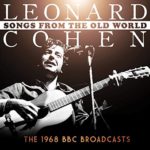 Songs From The Old World

On December 27th, 1967 Columbia records released Songs of Leonard Cohen, the debut album from an obscure but critically respected Canadian poet and novelist. Reviews of its ten tracks in the American press were tepid, and the album only crept into the Billboard 100, but over in Europe it was a breakout success, spending over a year in the British charts. Cohen instantly became an in-demand act, and he was keen to capitalize on the interest. Shortly before the release of Songs of Leonard Cohen, BBC television transmitted the maiden broadcast of a new music show, Once More With Felix , hosted by the American-born, British-based folk singer Julie Felix. Cohen was booked to appear on the 27th of January 1968 edition of the show, where he was introduced to a nationwide audience performing The Stranger Song, as well as Hey, That s No Way To Say Goodbye in a duet with Felix. That summer he returned to England to record what would become two television specials for the BBC. Entitled Leonard Cohen Sings Leonard Cohen , the shows comprised 13 tracks recorded at The Paris Theatre, often colloquially known as The Paris Studios at 12 Lower Regent Street in London. Cohen was joined by Dave Cousins of British folk-rock aggregation The Strawbs playing banjo, as well as Danny Thompson of Pentangle on upright bass. Together the trio performed almost all of Cohen s debut album, yet there were also incredibly early versions of You Know Who I Am, Bird On The Wire and Story Of Isaac that would not be recorded for Cohen s sophomore release, Songs From A Room, until October of 68. The session at The Paris Theatre was ultimately divided into two parts, with You Know Who I Am, Bird On The Wire, The Stranger Song, So Long, Marianne and Master Song broadcast on the 31st of August, and the remaining eight tracks transmitted on the 7th of September. Songs From The Old World presents the complete Paris Theatre recordings, an essential collection from the early months of Leonard Cohen s musical career. TRACK LISTING 01. You Know Who I Am 02. Bird On The Wire 03. The Stranger Song 04. So Long, Marianne 05. Master Song 06. There’s No Reason Why You Should Remember Me 07. Sisters Of Mercy 08. Teachers 09. Dress Rehearsal Rag 10. Suzanne 11. Hey, That’s No Way To Say Goodbye 12. Story Of Isaac 13. One Of Us Cannot Be Wrong