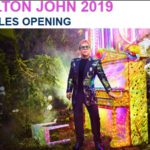 Elton John will play next year at the Montreux Jazz Festival for the very first time on Saturday 29th and Sunday 30th June 2019 as part of his farewell tour.

The ticket sale will open as follows: